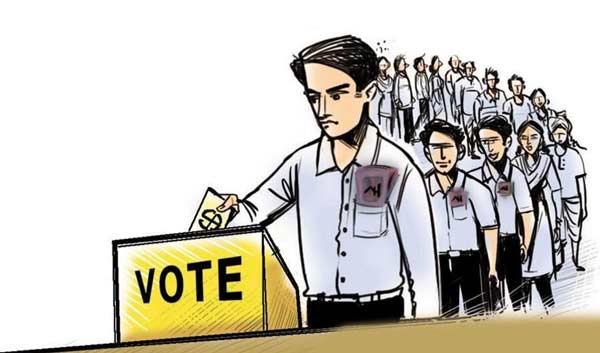 Is election fever gripping your house?

Nah, ours neither. It’s definitely more of a mild political allergy or a few bouts of isn’t-there-anything-else-going-on queasiness. So before it turned into full-blown who cares I thought I’d see if my children could brighten things up.

Last year Boy One’s class did democracy as a topic. They split up into parties, wrote manifestos, held hustings and, eventually, an election.

Boy One was in the National Fun Party and they were standing on a ticket of longer school holidays and free fairgrounds in every town.

The NFP enjoyed a landslide victory and, as a prize, got to ‘run’ the class for a day. I saw the teacher at home time that day and I think she’ll probably have a long hard think before she offers that for winners again.

Boy One’s enthusiasm for the whole thing was really fired up and we all went to visit the Scottish Parliament at Holyrood – an excellent day out with a great cafe and free crèche. (Yes, I know not what we’re voting about this time, but the website does have some helpful resources about how government works)

Anyhow, we’ve been talking about the election quite a lot here and I did a round-up of places to get useful information in a post last week.

I thought it would be fun to start a meme to see what kind of a job the kids would make of running the country. So I put Boy Two in the hot seat and asked him some questions:

Why are we having an election?

Because Gordon Brown has had the job for four years and now it’s someone else’s turn.

If you were allowed to vote on Thursday who would you pick and how would you decide?

​
I don’t really know. I think I’d have to do eenie meenie minie mo.

And what laws do you think the new government should bring in?

​
Banning smoking. I really don’t know why it is allowed at all. It should be illegal. (Here I tried to explain about civil liberties) OK, then only let people smoke in their houses with the windows shut.

People should be made to recycle everything they can. It’s really important that we do everything we can for the planet.

On birthdays and other special occasions, the government should get big planes to go up and drop chocolate down for people.

(There was a discussion about whether the chocolate would melt and whether a shower of melted chocolate was, in fact, a good thing. In the end, he agreed that wrapping it, mini-egg style, was best)

Should children be allowed to vote and why?

Yes, of course. We live here too. Children should get a say in how things are run, it’s only fair.

So there you have it – a clean-air environment where people take turns to run things and you get chocolate from the sky on your birthday. I’d vote for that.

Now, we’ve set up a Mcklinky which makes it really easy to take part and add your kid’s answers. I’ll tag a few bloggy folk to get the ball rolling, but everyone is welcome – the more the merrier.

Welcome, everyone! I'm Karl D. McGrath, an Americal living in Thomasville, Georgia. I love everything about writing, family, spending time with friends, kids, and even home improvement, tools, kitchen gadgets, etc. I work closely with several charities and have a passion for making people laugh. If you would like to chat with me please feel free to reach out via social media or email.